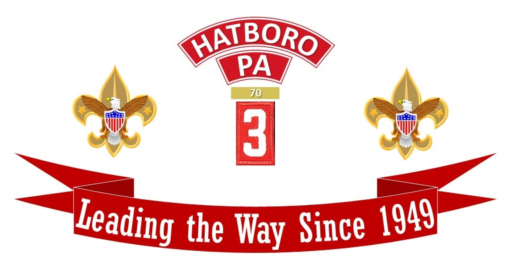 Seven decades…from 1949 to 2019.  Harry Truman was President of the United States and a baseball team named the Athletics played in a place called Shibe Park in the city of Philadelphia.  World War II had ended only 4 years prior, and over the next 70 years, 12 men would serve as President of the United States.  The Korean conflict was still a year away and the War in Vietnam would not begin for another 15 years.  But in a small town called Hatboro Pennsylvania, Troop 3 was chartered to Hatboro Baptist Church.

Troop 3 was the 3rd Troop in Hatboro to be awarded a charter by the Boy Scouts of America, thus the number 3.  Troop 3 was chartered in the Valley Forge Council in Washington District.  The national number was Troop 446 and would remain that way until the merger of the Valley Forge Council and Philadelphia Council in 1996.  Troop 3 never used the number 446, but always identified as Troop 3.

Pride has always been an important word in the 70-year history of Troop 3.  Pride, as C. Stoy Weaver wrote in a 25-year history of the troop, has been instilled by its 14 Scoutmasters and the outstanding young men who have worn the troop “3” patch on their shirt sleeves.

A continuing thread of quality that has blessed Troop 3 is its Scoutmaster ranks.

Len Henryson was widely regarded as the spark plug who kept Troop 3 together through a hectic first year…a year highlighted by the Troop winning the Delmont Olympics (a competition that combined scouting and athletic skills) during the Troop’s inaugural stay at summer camp.

Len Henryson was followed as Scoutmaster by Warren Clemens, a Hatboro gun collector; Ellsworth Snyder whose son was a member of the troop and Bill Clausen, the uncle of a troop member.  Bill Clausen had been succeeded by Bob Casey, who had been troop Committee Chairman and agreed to take the post on an interim basis so that the troop’s charter could be retained.

The search for Scoutmaster #6 ended, quite surprisingly, when John G. Weand, who for many years was an active scout and scouter in Norristown, came to a committee meeting and announced that he would like to be the troop’s Scoutmaster.   The bright and quick-thinking members of the committee were quick to accept the offer.

There was an interesting irony in Weand’s leaving Troop 3.  As a member of Hatboro’s Lehman Methodist Church, he felt a strong sense of responsibility when Lehman Methodist experienced Boy Scout Leadership problems.

Weand was prevailed upon to become the Scoutmaster of Lehman Methodist’s Troop 81 and Troop 3 had the great fortune to have C. Stoy Weaver to take over the Scoutmaster position-if only on a short-term basis.

Weaver, an Assistant Scoutmaster at the time, said he would be Scoutmaster of Troop 3 until a more permanent successor could be found.  Stoy Weaver was a legend of scouting in the town of Hatboro as well as a much broader territory.  Stoy Weaver, Scoutmaster #7 at Troop 3, served as a committee member on the District staff and could always be found hiking or camping someplace.

Jesse Burnett, a wide-smiling Texan with a fantastic drawl was the next Scoutmaster.  Like Stoy Weaver, Jesse was an outstanding camper and was a leader for high-adventure trips to Canada and many other rugged locations.

Work assignments forced Jesse to relinquish the Scoutmaster position and he was succeeded by Hank Hudson who had two son’s become Eagle Scouts.

Scoutmaster #10 was Harry Hilger who also served as the Troop Committee Chairman and Harry was followed by Ralph Nagle who became active in the troop when his oldest son joined.

The longest running term as Scoutmaster belongs to Bob John, who served as Scoutmaster from 1972 until his retirement, 40 years later, in 2012.  A Hatboro Troop 3 alum, Bob John earned his Eagle rank in 1962 and is in many ways, “Mr. Hatboro” as well as “Mr. Troop 3”.  He is a graduate of Hatboro High School and the Villanova University Law School and currently practices law in Hatboro.

In addition to his leadership role with Troop 3, Bob has an impressive list of accomplishments in scouting, including serving on the staff of the Washington District, Valley Forge Council and Schiff Scout reservation.  He was also program director at Camp Comer in Alabama and was instrumental in having Troop 3 visit that facility in the northeast corner of Alabama near Fort Payne for summer camp.

Stuart Gentry would become Scoutmaster #13.  Stuart, a chemist and lawyer, was an Assistant Scoutmaster prior to taking the role of Scoutmaster.  He is an avid outdoorsman with three children, one of whom was a Senior Patrol Leader and Eagle Scout.  Stuart would serve as Scoutmaster from 2012 until 2015 when he and his wife would re-locate to Colorado.

In May of 2015, Bob Waeltz was installed as Scoutmaster #14 and continues to serve in that role.  His son is an Eagle Scout and former Senior Patrol Leader.  Bob was an Assistant Scoutmaster and ran the New Scout Program prior to becoming Scoutmaster.

Firsts have always been a priority for Troop 3.  Tom Casey was the first troop member to attend Philmont Scout Ranch in New Mexico.  He attended the ranch in 1955.   The first Troop 3 contingent to attend Philmont was comprised of Fred Ewald (chairman of the 25th anniversary celebration), Bob Kay, Don Gleiter, Russ Casey, Neil Farnsworth and Tom Weaver.  They were at Philmont in 1949.  Tom Casey was also the first Troop 3 scout to attend a National Jamboree, camping with folks from across the nation and around the world in 1957 at Valley Forge.

So, what has been happening since we celebrated our 60th Anniversary ten years ago?  Plenty, but that should come as no surprise to anyone.

There is always camping and adventure with Troop 3, even if the weather isn’t always what you see in post cards.  Camping and activity locations have Resica Falls, Mt. Norris Scout Reservation, Haliburton, Baiting Hollow, Yawgoog, Camp Buckskin and Goose Pond for summer camps.  Other notable trips have included; Harrisburg, Canoeing the Antietam Creek, Allaire State Park, the US Military Academy at West Point, the US Naval Academy, the Grand Canyon of PA, Cape Henlopen and Cooperstown.

Troop 3 has also gone backpacking the Quehanna Trail, whitewater rafting on the Lehigh River and the Youghiogheny River in western Pa, and visited Holtwood Environmental Center, Ricketts Glen and Worlds End State Parks as well as the Rhinebeck Aerodrome, Manassas Battlefield in Virginia and French Creek State Park.  The list could go on and on.

High Adventure Trips over the past 10 years are just as impressive.  Of course, there are our trips to Philmont.  We’ve sent contingents in 2010, 2012, and 2017 and we have a contingent preparing for a 2020 trek.  In addition to Philmont, there is the annual High Adventure Trip to Mt. Washington in New Hampshire.  Other High Adventure Trips have included canoeing the Allagash Wilderness Waterway in Maine and backpacking the final leg of the Appalachian Trail to Mt. Kathadin in Maine.

And if high adventure, terrific camping and excellent fellowship are not enough to provide fond memories of 70 years of scouting in Troop 3, the caring reputation of the troop is.  If a job needs doing and it must be done right, people in the community can always count on Troop 3.

If a good deed was needed, who else but the members of Troop 3 were there to do it?  So beyond regular weekly meetings, summer camp and weekend camping trips, there was always the knowledge that the fine young men of the community were becoming better young men and outstanding adults thanks to Troop 3 and its community presence.

And the community was always there to help Troop 3.  Since chartering Troop 3, Hatboro Baptist Church has been a tremendous support to the troop.    So have been the generous people who have supported our pancake breakfasts and Ham and Turkey Suppers and those who have bought Camp/Adventure Cards.  As much as the community was present, so to have been the parents of our scouts.  They have served timelessly and enthusiastically as leaders, assistants, committee members, drivers, coordinators, phone contacts, arrangers, dishwashers and cooks.  We could not have done any of this without all of you.

So, here is to every one of you.  Our scouts, adult staff, committee members, parents, community members, staff and congregation of Hatboro Baptist Church, and to anyone who has ever supported the mission of Hatboro Troop 3,“We thank all of you for your incredible support over the last 70 years.”

Troop 3 – seven decades old and proud.  Proud of it’s past and excited for the future.  Troop 3 truly has been “Leading the Way since 1949.”

Sadly, we have lost the following Scouters since our 60th anniversary.  Troop 3 wishes to thank these men for their service and dedication to the troop and also their families for sharing them with us.  As Scouters, we can only hope that we can serve and represent the ideal scout as well as these men did in their lifetime.